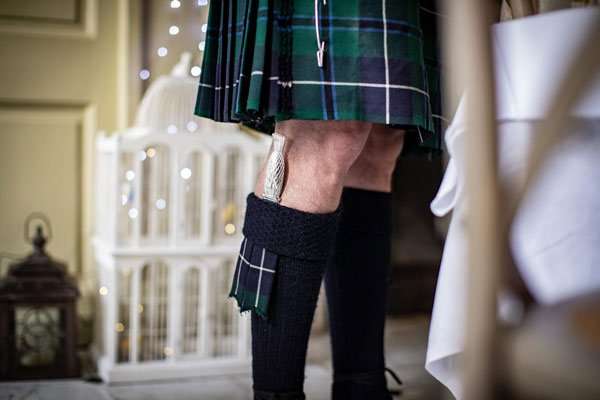 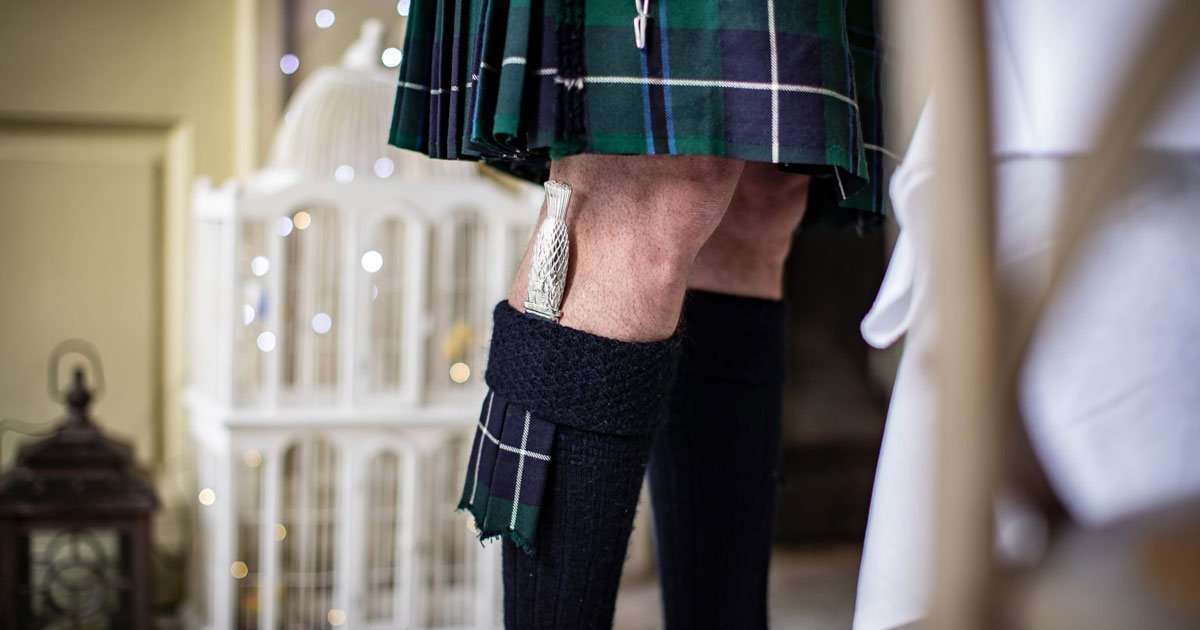 The sgian-dubh is a small, single-edged knife, or ‘sgian’ in Scottish Gaelic. It is worn as part of traditional Highland wear along with a kilt and sporran and tucked into the top of the kilt sock leaving only the top portion, the ‘hilt’, visible.

Hayward & Stott are pleased to share our stylish take on the traditional sgian-dubh, which is part of our Thistle Collection, launched in 2019.

Our luxury sgian-dubh design was brought to life by infamous Scottish sgian-dubh maker, Frederick Alexander Graham. Hand-crafted in Edinburgh, Graham has created custom-made pieces for an impressive roster of clients, including Prince Philip, Prince Charles and the late Kind Olaf of Norway.

The sgian-dubh has been part of the traditional kilt outfit since the 1800s, originally used for eating and preparing food and for regular daily necessities such as cutting materials and protection.

It’s perhaps this ‘necessity’ to Highlander daily life that has meant the sgian-dubh is now a classic, symbolic element of traditional Scottish dress.

The name ‘sgian-dubh’ derives from Scottish Gaelic, commonly translated as ‘black blade’, or ‘hidden knife’. It evolved from the larger highland dagger, the ‘sgian-achlais’, or, ‘armpit knife’, which was concealed under the armpit and carried in the upper sleeve or the lining of a jacket.

In Highland tradition, it was courtesy when entering the home of a friend and ally to reveal any concealed weapons. However, preferring not to be left wholly unprotected from unexpected intrusions, the sgian-achlais would be removed and placed in the top of the stocking, close to the dominant hand. It is this partially hidden placement that is thought to have informed the name of the sgian-dubh.

The sgian-dubh is similar to a small skinning knife, which would have been part of the Highlander’s typical set of hunting knives. These knives often had antler handles and can be found in early designs of sgian-dubhs.

As part of highland military wear in the 18th century, the sgian dubhs might have included Celtic knots which represented courage, intelligence and strength. It’s thought that any ornamentation on the knives reflected the Highlander’s lack of confidence in ‘paper’ money. Instead, they chose to embellish much of their apparel with silver and cairngorm stones which were seen as high value; proudly wearing their wealth. 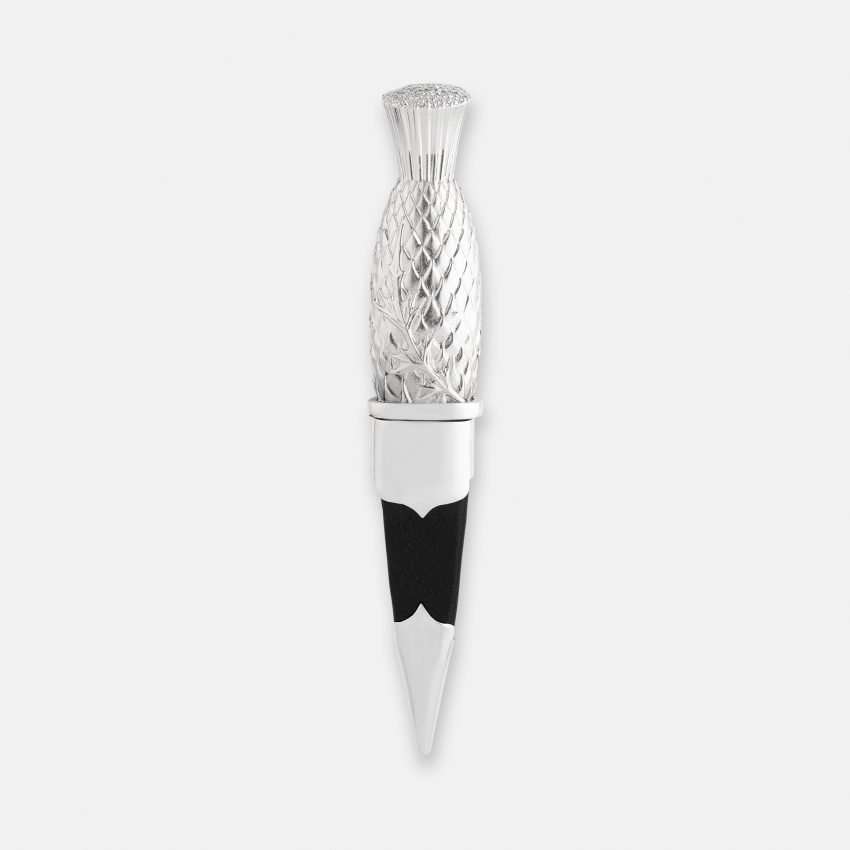 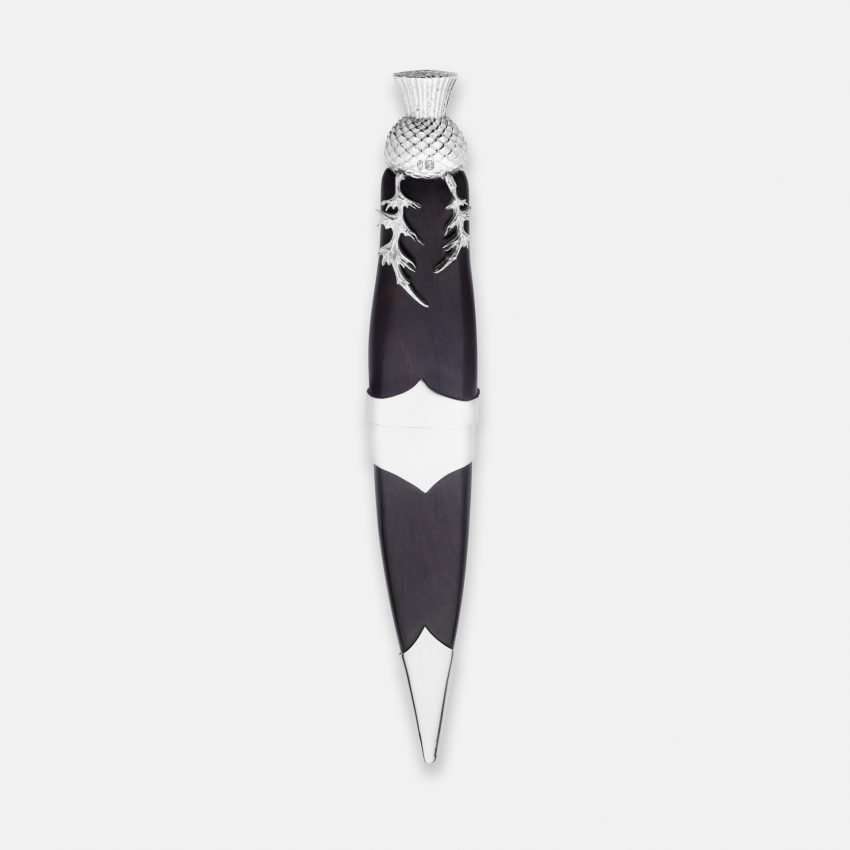 The sgian-dubh is often found in portraits of kilted men of the mid-19th century, such as the portrait by Sir Henry Raeburn of Colonel Alasdair Ranaldson MacDonell of Glengarry which hangs in the National Gallery of Scotland.

In the painting, you’ll see visible at the top of his right stocking a nested set of two sgian-dubhs.

Early sgian-dubhs varied in construction, some with a ‘clipped’ or ‘drop’ point tip. Now, the universal design is the ‘spear-point’. The earliest known blades were made from German of Scandinavian steel which was highly prized by Highlanders.

Traditionally the ‘scabbard’ is made of leather, reinforced with wood and fitted with mounts of silver or metal which can be cast or engraved with personal Scottish designs.

Today, some sgian-dubhs are hand-carved with ebony or bogwood hilts, as well as sterling silver fittings with gemstones. Blades might be made of Damascus steel and etched with Celtic designs or family motifs.

The sgian-dubh is a must when worn with a kilt, and the Hayward & Stott luxury design offers a contemporary twist to classic Scottish style.

With eye-catching sterling silver embellishments, they are an ideal choice for ceremonial occasions such as weddings and Christenings. The classic thistle motif makes them an excellent addition to your traditional Highland wear at any Scottish gathering, such as a black tie ball or a Robert Burn’s Night.

In addition to our feature sgian-dubh, the Thistle Collection includes other essential highland dress accessories. Pair with our Leather and Sterling Silver Thistle Belt, Thistle Kilt Pin and Thistle Lapel Pin for a truly authentic and stylish highland look. 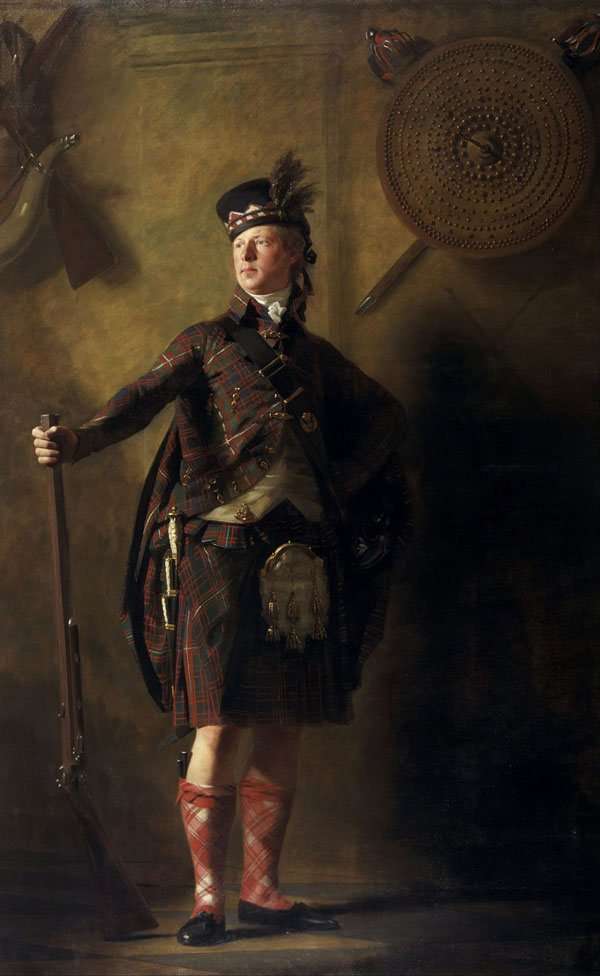